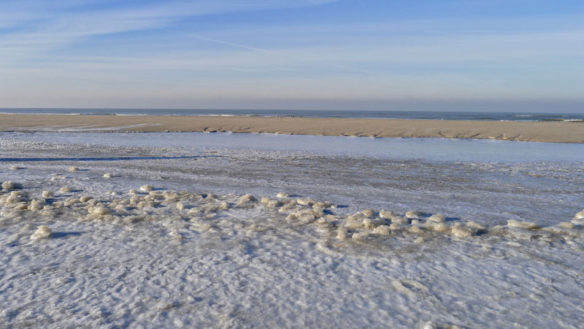 In general, the west coast of the Netherlands is oriented south – north and is characterized by sandy and flat beaches, popular for tourists all year round.

In contrast, the south western estuarine area is mostly lined by artificial stony dikes to protect the low lying land from the sea. After the 1953 storm surge, killing over 1800 people, most of the estuaries were entirely closed. However one of the estuaries, the Eastern Scheldt, was only partly closed, and now offers an excellent habitat for newly settled marine species. They possibly settled either as a result of (geographic) range extension related to climate change, or have migrated to the area by (macro)fouling on ships’ hulls or been inadvertently ferried in ballast water.

Only the most southern estuary, the Western Scheldt, was left completely open allowing access to the port of Antwerp, Belgium.

However, in this Beach of the Month article, we focus on that part of the North Sea coast that mainly consists of 100% mineral sand without any rocks and only some artificial hard substrates.

At low tide a series of north – south oriented sandbanks emerge along the foreshore of Dutch beaches. Their interstitial fauna provides food for several shore bird species. Between these sandbanks (also known in literature as bars or ridges), shallow troughs exist (Dingler 2005; Chrastowski, 2005). These are drained at low tide and inundated at high tide, in accordance with the diurnal tidal cycle that prevails along this part of the European sea shore.

Only very occasionally, short winter conditions may freeze the surfaces of these sandbanks, also generating the formation of small pieces of sea ice (Figure 1). The last time that these conditions prevailed was January 2013.

Our observation of water escape structures

In 2013, January 25, some interesting water escape structures were observed near the coastal resort of Bergen aan Zee, (52o39’43’’ N, 4o37’59’’ E), in the Netherlands. At that time, winter conditions prevailed with a mean temperature along the North Sea coast of – 4,5o C (23,9 F). This was the last day with freezing conditions after the uninterrupted cold period, which started on January 13.

While the surface of the sandbanks was frozen into a hard upper layer, we observed on the lee side of one of the sandbanks, at low tide, about seven boiler plate or sieve plate alike structures on a row. Four of them performed the appearance demonstrated in Figures 2 – 5. Two of them were interpreted as an initial phase; we called them ‘blisters’ (Figure 6 – 7). The last of seven was destroyed because we were interested whether there were any burrowing animal species hiding in it, if there were other structures like a cavity, or streaming patterns to be observed inside. Neither an animal species nor any other structure were observed inside. We suggest that this could have been caused by the liquefaction of the water-saturated fine sand, thus preventing the formation of any permanent or semi permanent structure inside.

A literature search (see references) revealed that our structures were sand volcanos. The mean diameter of the observed sand volcanos (n=7) was about 30 cm and they were elevated between 2 and 4 cm. The direct surroundings of any sand volcanos were not frozen, however the wider adjacent area was frozen, as clearly shown in Figure 2 – 5. We did not record the thickness of this frozen layer. All sand volcanos had recently discharged water into the lower tidal basin: none of them were frozen and small volumes of water seeped out.

The hypothesized origin of these specific sand volcanos

In conclusion, the unique combination of local conditions most probably caused these sand volcanos. After these conditions changed with increasing temperatures, all sand volcanos disappeared. They were neither observed nor described before from the Dutch sandy coast.

I am indebted to Orrin Pilkey, William Neal, Joseph Kelly and Andrew Cooper for their critical questions and remarks on the hypothesis presented here. Thanks to the Coastal Care Team for publishing my submission for Beach of the Month.