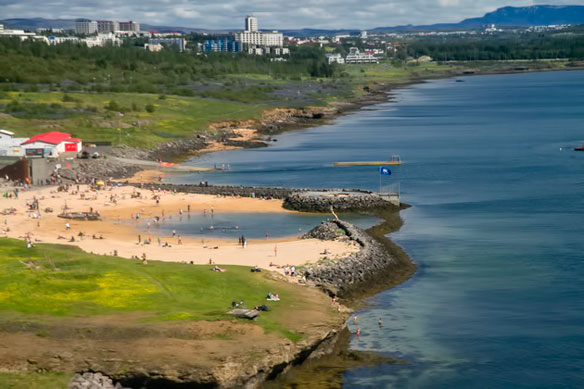 Iceland’s beaches typically consist of volcanic black sand and gravel, but Nauthólsvík Geothermal Beach near Reykjavík is totally different from Reynisfjara, for instance, which is one of the most famous black sand beaches in Iceland. The light-colored sand on Nauthólsvík was mined from an area called Syðra Hraun in Faxaflói, a bay on the west coast of Iceland, an area of the ocean where “shell sands” have been mined for years, often for use in making concrete. One web page mentioned that the sand was brought from Morocco, but that notion was disputed by a personal communication from a Reykjavík city employee. Co-author Pilkey, however, believes, based on the color of the sand, that the statement about the sand coming from Morocco could be true. He suspects that at least part of the sand is from Morocco because the beach has the color and the uniformity of a Moroccan dune sand and does not appear to be a shelly sand.

Nauthólsvík, near the city airport on the east side of Reykjavík, is only one of several light-sand beaches found around Iceland. The geothermal designation means that hot water plays an important role at this popular beach. According to the Iceland government offices, almost all of the country’s heating and electricity generation are provided by renewables – hydro and geothermal energy. Reykjavík Energy, a public utility company, harnesses hot water from geothermal fields in Reykjavík and operates geothermal plants where electricity and hot water are generated.

Before Nauthólsvík Geothermal Beach was created, people from the city swam at this location in a warm stream of water that flowed into the small bay of Fossvogur from hot water reservoir tanks situated atop the hill Öskjuhlíð nearby. The area became polluted and was closed in the 1980s. About a decade later, the city cleaned up the pollution and invested in large rock walls to enclose a lagoon, creating a cove on the coast. A sandy beach and other amenities were added. The walls protect the swimming area from some waves and help keep the sand from washing away. However, the beach has been replenished six times since 2001, according to city personnel.

Some Icelanders swim or at least take a dip in the cold ocean around Iceland any time of year, and locals and tourists alike enjoy the therapeutic benefits of the numerous natural thermal pools found throughout the island, such as the famous Blue Lagoon. Nauthólsvík Beach makes use of geothermally heated water and can be used year-round. Excess hot water from the water tanks of Reykjavík Energy is piped to the man-made lagoon to produce a special environment for beach activities and swimming enjoyment. The opening between the two rock walls allows the cold seawater to enter and mix with the hot water, creating a temperate bathing area.

On the seaward edge of the beach is a round concrete hot tub, sometimes called the “hot pot,” which is heated by the piped-in warm water. The water in this tub mixes with seawater as the tides come and go. Part of the planned recreational use of the beach, the hot pot is good for sitting, floating, or getting warm. At high tides, the pot is partially submerged, bringing the temperatures a bit lower. At the back of the beach is a shallow, good-sized, rectangular hot tub with a higher temperature, making a comfortable place where families can soak, relax, and commune. The temperature of the water in the lagoon ranges from about 18-20°C in the large hot tub and in the smaller hot pot from 30-35°C, the latter varying depending on the tides.
Nauthólsvík Geothermal Beach opened in 2000 and has earned the coveted Blue Flag status, which indicates it meets strict hygiene, water quality, facility, information, and safety standards. The site has a service center, added in 2001, with changing facilities, showers, steam room, and a cafe, plus a sailing club and walking paths are nearby. The recreational opportunities are plentiful. When co-author Longo visited this popular man-made beach in the month of June, most of the people were in the hot tub at the back of the beach, although sometimes the beach is crowded like many U.S. beaches in California, North Carolina, or Florida can be.

In April 2018, Reykjavík city council announced plans to build two more geothermal beaches, to be located in east Reykjavík at Gufunes and Skarfaklettur.