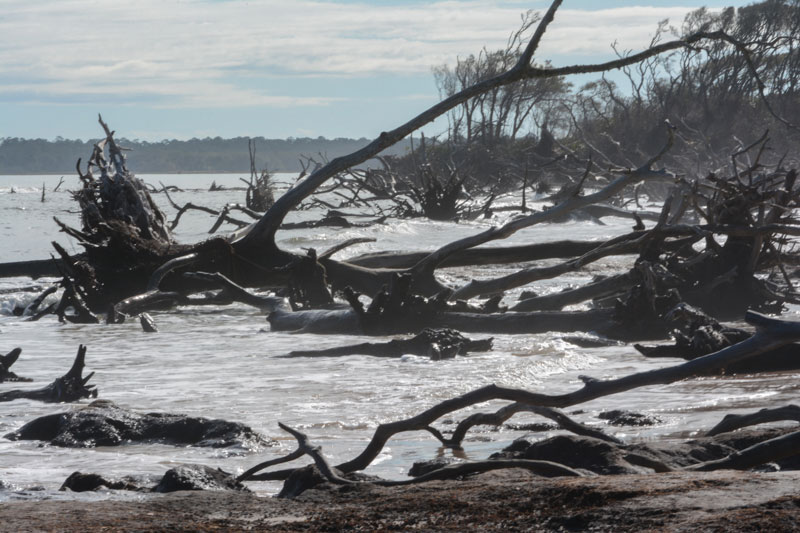 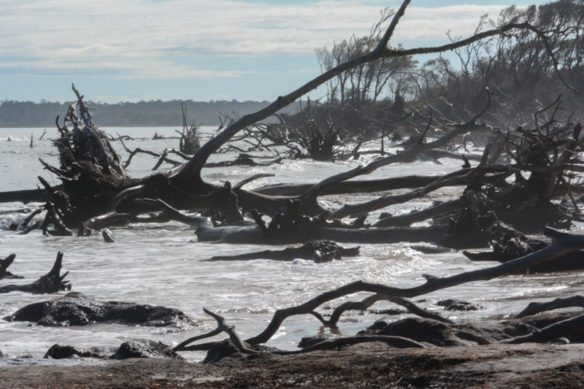 The locals call it “lava beach”—a misnomer which leads some to believe the unique formation found here are igneous in origin. But these mystifying “black rocks” crumble to the touch, staining the hands, feeling gritty with sand. Although many are black, these “rocks” are sometimes light colored, deep red or burnt brown. Composed of ancient sand compacted by weight and time, the beach’s eroding cliff is hard enough to form cool little caves, draped with roots of vegetation struggling to survive above. The “black rocks” form promontories cracked with lines, pools, and rounded stones, being carved by waves on this northern Florida beach. Sometimes you can see sediment swirled together in the rock-like formations—evidence that once this material was deposited by water. Now, these layers below the maritime forest are exposed.

Morning fog lifts and a hazy sea breeze makes a beautiful, mysterious scene, a feeling impossible to fully capture on my recent return trip. It’s busy in January but easy to escape up the beach. As the deep black material disappears, white sand instead composes the beach, and overwashed areas create holes in the forest to rest. The plucked branches of stunted oaks make a patterned rhythm overhead, saw palmettos forming the forest floor, around my bed of washed up Spartina. Last fall, Hurricane Matthew hit with substantial force here and entire palmettos, still alive, and oaks with root balls as large as 20 feet are newly washed up. Out to sea, the silvery surfaces of those trees fallen long ago shine in the low morning sun.

A few years ago, in August, at low tide, I had to come to this beach for the first time, on a drive leaving Jacksonville—and found it a wonderful surprise. Weathered trees piled high, a beach full of secret hiding places. I would have recognized pluff mud, but the “black rocks” take on a different character—sandy and hard, not sticky and soft. Such depth of color stains as it crumbles. An almost rusty copper color seeps out from below the sand. FloridaHikes.com says the “rocks” are composed of compressed sand and decayed leaves. (1) Dr. Charles Finkl, who has studied Florida beaches extensively, describes the “rocks” as “weathered coastal sands” and not rock per se, but “partially indurated” or hardened sand. He says “The dark or black color is most likely due to reducing conditions when the sediment was flooded. It then became contaminated by organic materials, humus, manganese, and reduced iron. The lighter colored area or splotches are most likely oxidized organo-iron compounds.” Iron, depending on various conditions and compounds, can “range in color from black, olive, dark gray, red, to yellowish hues.”

“As the deep black material disappears, white sand instead composes the beach, and overwashed areas create holes in the forest to rest… ”
— Cecelia Dailey

Living with Florida’s Atlantic Beaches explains: “The muds and old tree roots contained in such deposits are from marshes and forests, indicating that this location was once the backside of the island. The shoreline (beach) retreated landward as it is doing now, and the island sand first buried the marsh mud and then the forest that grew in the soil as the island rolled over itself.” Clearly island migration is happening here, and if there is any doubt that island migration is a real phenomenon, this is the beach to study.

Fort George Inlet, shifting to the north, is free to roam on this undeveloped coastline. (2) There are 3 points of entry to Big Talbot Island’s trails allowing walking and biking. Parking is set about 1/2 mile behind the trails leading to the beach. Blackrock Trailhead is in the center of the island, where I explored.

Big Talbot Island is a protected state park, bordered by several more parks (with camping) including Little Talbot and Amelia Island. Timucua Ecological and Historical Preserve encompasses 46,000 acres behind the Talbot islands with artifacts of Native Americans including shell mounds, ruins of tabby slave houses and other structures, and a variety of habitats to explore including marsh, swamps and maritime forest.

A huge contrast to the urban areas of Jacksonville to the south and Amelia Island to the north, heavy with beachfront development, these parks prevent future development in this lowland adjacent to St Johns River, Fort George Inlet, and Nassau River. Highway A1A runs along the Florida coast starting at Fernandina beach and a ferry connects to Hanna Park, where I camped, a wonderful large city park right on the beach. A naval station, power plants, and industrial complexes line the St. Johns River on the way into Jacksonville.

The road coming in from I-95 toward Amelia Island in Nassau County has wide sidewalks and other road improvements, looking like they are getting prepared for growth. In fact, a 4,200 acre development project by TerraPointe LLC is part of the plan here. (3) In controversy, Fernandina Beach (on Amelia Island) is progressing toward approval for a 24 acre development that will fill wetlands. (4) Nearby Cumberland Island, GA—which gained national park status in 1972 to prevent any future development—is slated for 10 new homes on an 88 acre tract which carries “conservation preservation” zoning. (5)

Timucuan and nearby coastal parks including Big Talbot Island are examples that can be celebrated for their preservation of cultural and natural history, and prevention of development in sensitive coastal areas.

Additional articles on nearby development…

Many thanks to Dr. Charles Finkl and Dr. Orrin Pilkey for reviewing this article before publication and providing their remarks. Charles W. Finkl, Ph.D., CSci, CMarSci, FIMarEST, CPGS, CPSSc, PWS, M.ASCE is President & Executive Director of The Coastal Education & Research Foundation, Inc. (CERF), Editor-in-Chief of the Journal of Coastal Research (JCR), and Distinguished University Professor Emeritus, Charles E. Schmidt College of Science, Florida Atlantic University. Orrin H. Pilkey is James B. Duke Professor Emeritus of Earth Sciences, Nicholas School of the Environment, Duke University, and author of numerous texts including Lessons from the Sand (2016), Retreat from a Rising Sea (2016), The Last Beach (2014), The World’s Beaches (2011), Global Climate Change (2011), The Rising Sea (2009), Useless Arithmetic (2007), Atlantic Coast Beaches (2007), How to Read a North Carolina Beach (2004), A Celebration of the World’s Barrier Islands (2003), The Corps and the Shore (1996), The Beaches Are Moving (1983).