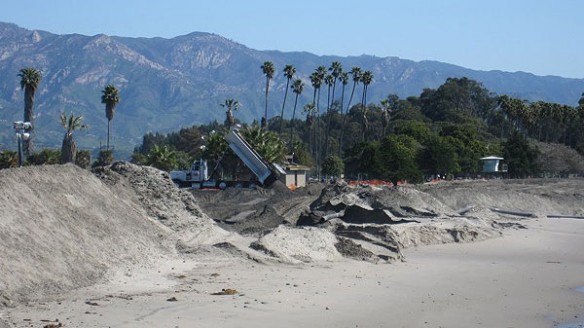 Goleta Beach County Park, occupies approximately 29 acres with 4,200 feet of beach frontage in Santa Barbara County. The Beach Park is bounded on the west by the University of California at Santa Barbara and to the north and east, by private natural gas generation and storage facilities. An easement containing various utility and sewage lines traverses the park. To the northwest, Clarence Ward Memorial Boulevard separates the Park from the greater area of Goleta Slough and the Santa Barbara Municipal Airport. All portions of Goleta Beach Park situated landward of the sandy beach are located on top of a clay-rich fill base.

Goleta Beach Park has been a treasured community investment going back to the early 1900s. Today it is still the most heavily used park in the Santa Barbara County system, with an estimated 1.4 million visitors per year.

An ongoing problem concerning Goleta Beach is coastal erosion; sand and sediment is constantly being washed away and the beach is narrowing. After facing several El Niño storms, in the last 14 years, the beach has been eroding at an average rate of 20 feet (6 m)-per-year, and the park and its structures is in danger of being lost.

In response to this erosion, the County has placed several rock revetments on Goleta Beach in attempt to protect the park structures.

In 2009, the California Coastal Commission voted 9-1 to deny Santa Barbara County’s proposal to build a permeable pile pier, a “hard” structure designed to allegedly slow the effects of beach erosion by holding sand on the beach along the wharf at Goleta Beach. But in doing so, this groin project would have interfered with down-coast movement of sand to other beaches.

In March 2010, a “soft “option was chosen, that is: beach nourishment (actually re-nourishment or replenishment). In a sense, beach nourishment certainly appears as a far better solution than construction of hardened structures such as sea walls and groins, in that it allows the beach to continue to exist, well…temporarily! Indeed, beaches must be nourished in perpetuity, again and again and again. One can look at the nourishment record of nearby beaches to get a very rough idea of how long a particular beach may last, but of course, if the big storm occurs the day after the beach is nourished all estimates are meaningless… (Orin Pilkey, PSDS).

Beach (re-)nourishment involves bringing in sand by dredge, barge, or truck, to artificially build up the height and breadth of naturally disappearing beaches. Approximately 50,000 cubic yards of sand
necessary to Goleta’s beach replenishment, has been collected from Santa Barbara West Beach and Harbor. The nourishment project cost was 1.6 millions dollars.

Beach nourishment has both direct and indirect effects upon flora and fauna of the sandy shore, impacts that occur during dredging of subtidal sand, as well as those that occur during emplacement. The loss of beach critters is believed to impact on the shore birds and the swimming nearshore creatures, and to reduce the quality of fishing.

Key to the (temporary) performance of a beach nourishment project resides in sand compatibility used to nourish, the eroding shoreline. The borrow sand must contain essentially all of the same grain sizes that exist on the beach to be replenished. Thus, sand compatibility studies are of utmost importance. Costs for such investigations range from $100,000 to more than $500,000. Nationwide there has been a lack of control of beach sand quality for nourished beaches leading to dozens of beaches that are too rocky, too shelly or with a high mud content.

The shape of a beach may vary over distances of a kilometer to hundreds of kilometers and is based on the balance between processes that promote erosion and processes that favor deposition of sediment. Palliatives and artificial attempts to slow beach erosion exacerbate the problem. Thus, Nature needs to be observed and apprehended in responsible ways, and coastal developpement, construction and re-configuration need to be in accordance with reality.

The managed retreat option appears as the best solution. Beaches are dynamic, changing in shape over both space and time, while the seas are rising. As the beaches are allowed to naturally grow, upper beach dune plants and dunes will eventually form.

These are nature’s best form of coastal defense.