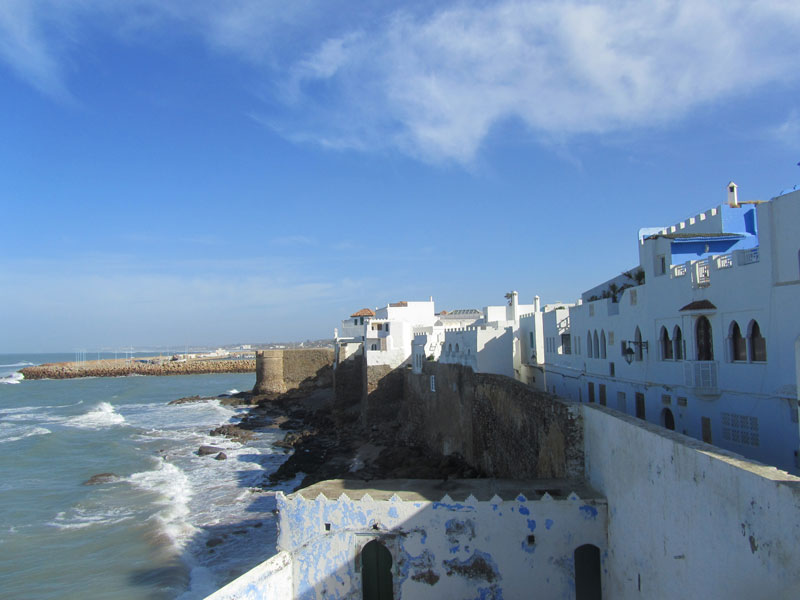 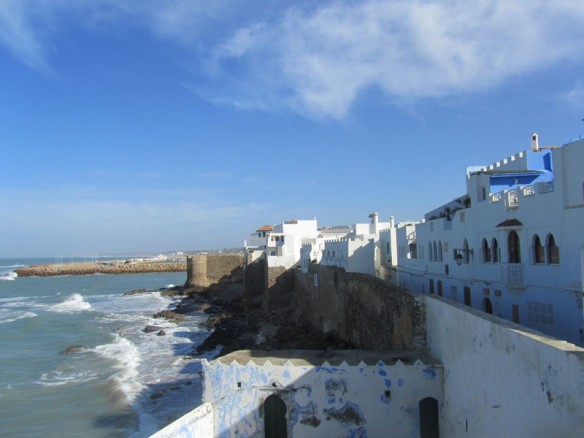 Asilah (also Assilah or Arzila) is a beautifully revived town on the Atlantic coast of Morocco whose medina is white washed every year in preparation for its annual arts festival. (1) Within the oldest part of the town, its medina, walls get adorned with murals along the pedestrian-only streets. The Moussem International Cultural Festival facilitates the city’s improvement budget for the year and many residents depend on the income for their livelihood too. “…Asilah has become, over the past thirty years, a city of art and culture par excellence, thanks to its cultural Moussem,” (translated from French) the newspaper Aujourd’hui reported. (2) The festival occurs each summer with a variety of activities including concerts, film screenings, and poetry readings.

Mohammed Benaissa, returning to his hometown in 1968, with friend Mohammed Melei, a painter and the president of the Moroccan Painters Association, spearheaded improvement of Asilah with diligent community members. Rehabilitation of the city began with a trash collecting program, simply organizing a pick-up schedule at first, then expanded into other vital infrastructure projects and renovations of homes, mosques and other historic buildings. (3, 4)

“Outside the medina walls lapped by ocean tides, there is a craggy shore with bright green algae growing on its eroded rocks. To the north, there are wide, flat sandy beaches but to the south, cliffs and caves are found on shoreline.”
— Celie Dailey

In 1978 with the guidance of the Aga Khan Development Network, water, sewage and electricity improvements were implemented. The roads of the medina are patterned with curved pavers which Melei suggested to add visual interest, his reasoning that “the children of the town should have something beautiful to walk on.” (4) Jetties and a harbor were constructed, as well as a public beach as part of the restoration and rehabilitation process. Projects continue to bring vibrancy and a sustained tourist economy to Asilah.

Municipal plans are made through a town council, local craftsmen and construction workers are hired for projects, and financial aid is given to the poor to restore their homes.(4) Benaissa was insistent on improvements made with the input of the people. To first color the white walls of the medina, eleven artists were invited to paint murals in 1978, along with children and older people, involving the whole town in the project. This began the tradition of decorating the walls.

Walking on the beach north of the medina, a harbor where a few boats sit is protected by jetties, made from rocks and dolosee, cement poured into complex geometric forms which interlock. Along the main avenue near the shore are piles of building rubble and debris, a sign that Asilah is still undergoing change. On an early walk along the main route toward the port and medina, only a few souls were out when I photographed.

Inside the medina, its shops had lovely handcrafted goods, new and old, from around the country including jewelry, genuine antiques, and fine shoes and clothing. Blue and teal frequently accent doors and architectural ornaments in the White City.

The surrounding urban area of Asilah has restored neighborhoods, at times the architecture feeling very clean and modern. A commercial district has a variety of restaurants, cafes, bakeries, outdoor food vendors, stores selling factory-made clothing catering to locals, and thrift shops selling old electronics and household items. A visit to a bath house in the winter was absent of any other travelers.

Outside the medina walls lapped by ocean tides, there is a craggy shore with bright green algae growing on its eroded rocks where men fish in the distance. To the north, there are wide, flat sandy beaches but to the south, cliffs and caves are found on shoreline.

Beaches and dunes near Asilah and elsewhere have been a source of sand mining for construction in Morocco. In a 2007 paper co-written by Orrin H. Pilkey, Robert S. Young, Joseph Kelley, and Adam D. Griffith, they report that “Once beautiful coastal dunes have been entirely removed along long reaches of shoreline. This is a potential economic disaster for coastal tourism in Morocco.” (5)

” Once beautiful coastal dunes have been entirely removed along long reaches of shoreline. This is a potential economic disaster for coastal tourism in Morocco ”
— Pilkey, Young, Kelley, & Griffith

Tourism has become a vital part of Asilah’s ecomony like many cities in Morocco. The city underwent a 3-fold population increase in the decade following restoration. (3) Today, Mohammed Benaissa is the chairman of the council that approves municipal development. In a January meeting this year, a new 3-story modern marketplace and several projects including a crafts complex and bus station were approved. (6) Benaissa has been instrumental in preserving the integrity of their culture, keeping foreign interests out of the picture, and integrating locals throughout the process of rehabilitation. For example, there are no large scale hotels in Asilah. Aga Khan Development Network, in their 1989 report, warned that Asilah could be destroyed by tourism and building speculation if it is allowed to happen too rapidly. (3)

A “program to strengthen the drinking water supply in the cities of Tangier and Asilah as well as in towns and neighboring douars” was recently announced by L’Economiste, described as a “mega-project” and presented by “the Sovereign of the construction works for the dam Kharroub.” (7, 8) Clean potable water is not adequate throughout Morocco. This project will also increase water availability for industry, fueling development for this region. There is potential here, as with all rapid development, for negative consequences if not carefully regulated and controlled.

Over last year’s Easter holiday, a 5-day tourism conference was held in Asilah. organized by the Regional Tourism Council Tangier-Tetouan. The council states that “Asilah suffers from a lack of tourism infrastructure” and “the absence of a tourism promotion policy” (translated from French). In particular, they want an information kiosk and advertising budget. They emphasized establishing tours that capitalize on natural sites and historical and archaeological relics in areas outside of urban districts. (9)

The Jewish cemetery is a popular site of historic interest. Without guidance, I missed the landmark, which is deteriorating, located adjacent to the ocean, south of the city. (10) Conquered by the Portuguese in the 1471 (11) and fortified with a wall, the invasion of Asilah was captured in a tapestry that reveals the invasion and looting of the city. (12) Asilah became a refuge to Jews when they were expelled from Spain in 1492, then Portugal, along with the Moors, by royal decree in 1497. (13) The Jews were later aided by the Portuguese in their conflicts with the existing population. (14)

The Jewish cemetery reveals a time when many coastal cities became enclaves of immigration for Jews in the age of exploration, but perhaps is even older. Asilah was a Phoenician colony in the 16th century BC and “…Jews have lived in Morocco since the days of Nebuchadnezzar, when they escaped Babylonian captivity on Phoenician merchant ships” (15) This example shows the cultural mélange of Morocco, and how a site such as the Jewish cemetery can work to paint a picture of historical events that contribute to Asilah’s identity.

” I got a sense in Morocco often of the two-headed beast that is tourism..”
— Celie Dailey

To the traveler looking for an authentic experience, Asilah was a welcome change from the bombardment from vendors, for example, in the city of Marrakesh. The slower pace of life in Asilah I hope will remain as they bolster their economy.

Cultural identity is so easily mutated when it becomes a source of income. I got a sense in Morocco often of the two-headed beast that is tourism. As a visitor, the authentic experience is a mirage, because I’m looking for a Morocco void of the influence of me, the tourist. Funds brought by holidays abroad are substantial income which alter an economy greatly. Culture is not a thing of the past, but exists here and now, in a complex relationship among international constituents.

This is the Morocco I found, in a state of flux, seeking modernity. Asilah is an example of the kind of balance that can be achieved while accommodating tourism, preserving traditions, and welcoming contemporary art and culture.