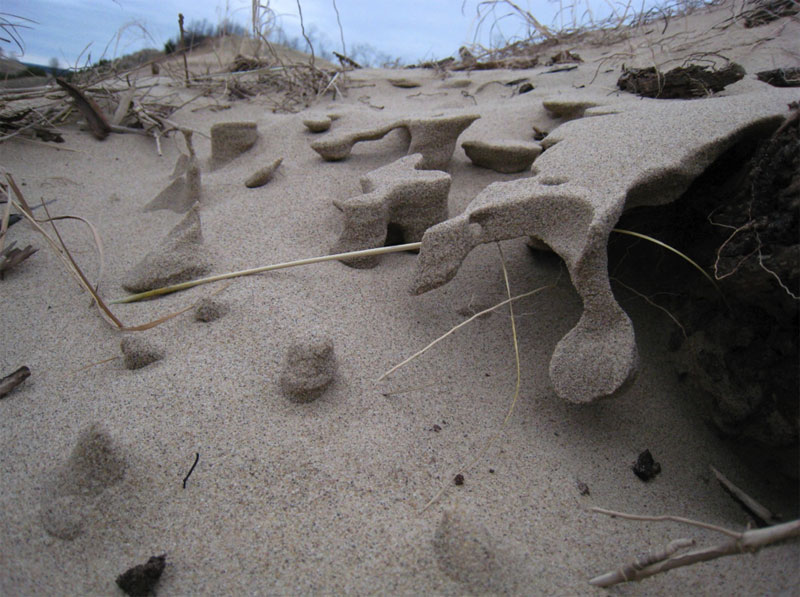 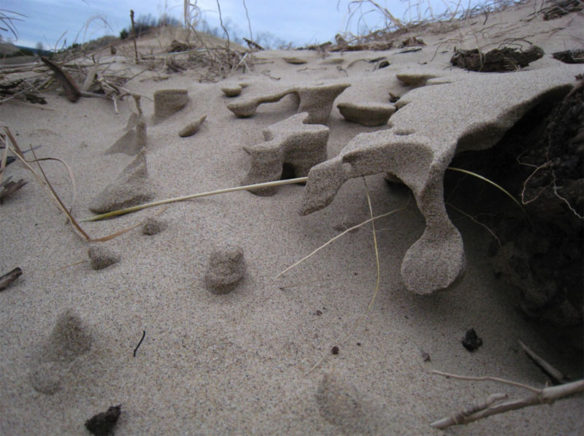 One of the general rules of beaches is that ‘no beach stays the same,’ neither over long reaches or very short stretches nor for very long time intervals. This rule is as true for fresh-water beaches as those of the salty seas. Rosy Mound Natural Area about 2 km south of Grand Haven, Michigan, on the eastern shore of Lake Michigan is a good example (Figs. 1 and 2). Although a very small beach in terms of the Park’s lake frontage, the beach/dune complex tells a story of both geological change and human-induced changes.

Geologically, today’s Great Lakes are the product of over 12,000 years of post-glacial changes in the region, including numerous rises and falls in the ancestral Great Lakes. Ancient shorelines have been both landward and lakeward of where Rosy Mound is today, but the great parabolic dune that rises nearly 200 feet above lake level provides a sedimentary record extending back over 3000 years ago (Fig. 1). That was when the sand dune began to grow atop earlier lake sediments (Arbogast and Loope, 1999).

“The sand grains in these dunes are the survivors of earth history… ”
— W.Neal, P.Wampler & B. Hesselsweet

The bulk of the dune growth was probably over by a millennium ago, and by the time of European settlement the dune was covered by a mature beech-maple forest. The sand grains in these dunes are the survivors of earth history – the dominant quartz grains derived from Precambrian granites and gneisses of the Canadian Shield, worked and reworked, along with feldspars and garnets, magnetite, and a suite of less common minerals; from glacial grinding, to rivers, to sand bars, dunes, to beach, and back again to a dune that persisted for as long as 3000 years!

Large ancient parabolic dunes characterize much of the eastern shore of Lake Michigan, the most famous being those of the Sleeping Bear Dunes National Lakeshore (Neal and Wilson, 2014). These dunes are prehistoric in age and should be regarded as fossil dunes in that if damaged or destroyed, current natural processes will not rebuild them to their former state. The lakeside feet of such dunes have been eroded over time by waves, providing natural sand nourishment to the associated beaches. However, the last 150 years have seen major impacts on both the dunes and the beaches by human activities.

From Mining to County Park

European settlement brought change to the region and this specific area. The dunes were heavily timbered in the late 1800s and again in the early 1900s. The rise of the auto industry created a demand for foundry/casting sands, and the fossil dunes along the Lake Michigan shore were ideal in sand composition, a bulk resource, and economic to mine. By 1924 there was sand mining in the Rosy Mound area, and there are regional examples where entire dunes were mined away (Lake Michigan Federation, 1999). Rosy Mound was decapitated and scarred by mining, and opened to further erosion by wind (e.g., blowouts).

Beach and dune sand mining is a global concern (Coastal Care). The history of such mining along the Great Lakes is a story in itself, and by the 1970s the level of concern in Michigan led to state regulatory legislation which has been strengthened since the first Sand Dune Protection and Management Act (see Lake Michigan Federation, 1999, for summary).

Interest in preserving the Rosy Mounds tract began as early as the 1960s when students at Rosy Mound Elementary School petitioned a local senator for the state to protect the dune. By 1989 the Ottawa County Parks and Recreation Commission’s plan to acquire the Rosy Mound property, including 3,400 feet of beach front, was a number one priority (Michigan Trail Maps, 2016). The Standard Sand Company proved to be a good citizen to the community and cooperated in the land transaction with the State purchasing the land and then deeding it to the county. The park was dedicated in 2004, and the county has turned the area into a recreational, but protected environment.

Instructional nature trails through the forest and an extensive boardwalk system across the fragile dune habitat down to the beach replaced random foot paths that were contributing to erosion (Fig. 3). Areas were revegetated with plantings of native species, and the park is off-limits to dogs.

“The natural cycle of the fall and rise of Lake Michigan over time results in alternating times of wide beaches and transverse dune growth… ”
— W.Neal, P.Wampler & B. Hesselsweet

The natural cycle of the fall and rise of Lake Michigan over time results in alternating times of wide beaches and transverse dune growth, to times of narrow beaches and erosion of the back-beach dune (a vertical water-level span of 6 feet reflecting changes in annual precipitation and evaporation). Areas of private shoreline ownership are lined with houses, and significant numbers of buildings have been lost or damaged by storm waves and erosion. The typical response is for property owners to build shore-hardening structures (seawalls, revetments, groins), causing additional beach damage. The parks leave the beach in its natural state without man-made structures, so the subaerial beach recovers quickly when water levels fall.

After an extended period of high water levels from the 1970s into the 1990s, lake level fell from the late 1990s to 2014. Figure 3 gives a good indication of how wide the beach was in 2010 (note the position of the ends of the boardwalks in reference to the water’s edge and beach width in comparison to Figs. 4 and 5). The current rise has greatly narrowed the Park’s beach, and the erosional bluff in the dune is cut back to the ends of the boardwalks. One can expect this trend to continue, but nothing is threatened other than a minor stretch of the boardwalk. The dune that’s being eroded is less than 25 years old, and will rebuild on the next low water cycle. In the meantime, the locale provides a good example for students and land owners of how the beach/dune changes, particularly in response to lake/climate events.

Like all beach/dune complexes, a beach walk at Rosy Mound provides the opportunity to see sedimentary bed forms both on the beach and dune surface as well as in cross section where waves have scarped the beach or toe of the dune. Ripples, wave swash marks, dark placers of heavy-mineral sands (dominated by magnetite, garnets, amphiboles and a variety of other minerals), and current crescents around pebbles or other obstacles on the beach are common. But from time to time, after storms or strong wind events, some less common features are found, particularly in the eroded dunes and at the back of the beach. Two of these types of structures are highlighted here.

From time to time mysterious concretion-like structures are reported along the Lake Michigan shore (Fig. 6). Technically these are rhizocretions (Klappa, 1980), and they are found in association with driftwood or deadwood buried by dunes, and then re-exposed after the formation of cemented sand around the smaller limbs of the tree remains (Fig. 7). Here we note their occurrence at Rosy Mound, however, similar structures have been reported at other Lake Michigan shore localities as well as along Lake Superior. The latter were studied by Dietrich and Lampky (1981), and they found that the cementation of the sand was due to fungal mycelia. Their formation is the result of the fungus growing on buried, rotting wood in permeable sand. Wind and/or water erosion later exposes the concretion-like structures, usually in association with some of the remaining wood on which they formed (Fig. 8). At Rosy Mound two different concretionary forms were noted (Figs. 8 and 9).

A second unusual structure was found in these same areas of exhumed wood. These were mini-caverns with very small sand columns in the caverns (Figs. 10 and 11). The structures are somewhat like the mini-hoo-doo or toad-stool like forms that develop when beach sands dry out differentially, typically after storms cause water saturation, and then strong winds sculpt the sand layers (see for example: “Wind carves amazing formations in Lake Michigan sand,” Detroit Free Press).

However, the mini-cavern structures at Rosy Mound were in wind-blown sands that accumulated on a gentle slope. It appears the sand was water-saturated, and a very thin layer of fine sand was more cohesive than the underlying bed as the sand dried. This layer formed the roof of the mini-cavern (Fig. 10), while the wind etched the underlying sand away to form the columns. Some of the columns became detached at their bases as wind erosion continued (Fig. 11). As erosion continued, similar structures were nearly completely erased, leaving only odd hanging tongues of sand that would be difficult to explain if one had not seen the mini-cavern stage of formation.

Thanks to the foresight of children, State and County Officials, and a cooperative mining company, Rosy Mound Natural Park will serve the public for generations to come without additional compromise to the environment.